Santa Claus will be back in Copake on Saturday, Dec. 10 because of the quick work of local first responders, the commitment of Columbia Memorial Hospital staff, and the state-of-the-art therapeutic hypothermia provided by Albany Medical Center. 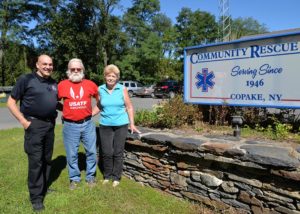 Copake resident Chris Quinby, 66, will again play the role of Santa in the Copake Holiday Light Parade on Saturday, Dec. 10, with festivities including a visit with Santa, light refreshments and a community bonfire starting at about 6 p.m. at Copake Memorial Park. Chris’s white hair and beard have made him perfect for the role of Jolly Old St. Nicholas for the last 15 years.

But, things nearly changed in April 2016. At about 10 p.m. on Monday, April 4, Chris collapsed due to a major heart attack stemming from blocked arteries. His daughter Stephanie Poucher called 911 and began giving CPR.

“He was clinically dead from dispatch and pretty much all the way up until just before they called the Life Net helicopter from Albany,” said Copake Rescue Squad and Greenport Rescue Squad paramedic Peter Doty.

“He was also shocked a total of 17 times between Copake and the Hospital,” Peter said of efforts to use a defibrillator to restart the heartbeat.

CPR continued as CMH doctors rushed to find the right treatment. A lidocaine injection helped temporarily restore a faint but regular heart beat and gave Chris time to be flown to Albany Med.

“The CMH doctor was fabulous. He never gave up. He tried every medicine possible and until lidocaine worked,” Peter recalled. 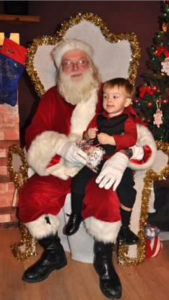 Chris Quinby as Santa Claus sits with his grandson, Landon, at an event in Copake. Click here to donate a support CMH’s lifesaving care.

The Life Net helicopter flew to Greenport Rescue Squad and loaded Chris in at about 1:20 a.m. The helicopter returned to Albany Med about 25 minutes later and the staff began preparing Chris for therapeutic hypothermia. That’s when a patient’s body temperature is lowered to near hypothermic levels to protect the brain, heart and other organs following a period of insufficient blood flow.

Albany Med has been using therapeutic cooling since 2008 and was the first hospital in the region to offer the treatment. Since then, the Hospital has used the treatment on hundreds of patients including Chris.

According to Michael W. Dailey, M.D., of the Department of Emergency Medicine at Albany Medical Center, the damage done to the brain is the result of the initial cardiac arrest-related injury and what occurs when a patient is resuscitated. That’s when oxygen-rich blood flows back into the cells and can set off a series of chemical reactions.

The critical care nursing and physician team in Albany Medical Center’s Cardiac Critical Care Unit has years of experience in caring for these critical patients at their most vulnerable moments, and this skill and experience contributes to successes like Chris.

“These chemical reactions cause the production of free radicals and release of other substances which cause swelling and inflammation in the brain, and reduce oxygen delivery to brain cells, leading to cell death,” Dailey explains. “Careful temperature regulation and cooling seems to decrease the injurious process and allow the brain to recover. When the body’s temperature is controlled, cell metabolism is reduced. Since the body requires less oxygen, the harmful chemical activity is reduced.”

“Therapeutic cooling was a life-saving treatment for Chris and allowed him to recover and become well enough to handle bypass surgery. But, the fast response and commitment of first responders in Copake and CMH were just as important. This is a good example of how healthcare systems can work together to save lives,” said CMH President & CEO Jay Cahalan.

“When he came out of the deep freeze as they call it, the nurses went in to check on him and they let out a yell, ‘My God, he is awake,’” Joanne said. “They came in and they said, ‘This is a miracle.’”

The staff quickly reacted after Chris woke up. They tested brain function with simple questions and were somewhat shocked when he answered the questions correctly, according to Joanne.

“And then they pointed to me and said, ‘Who is this woman and what does she mean to you?’” Joanne recalled with some humor. “He said, ‘She is the love of my life.’ But that could have been the drugs talking.”

At this stage, doctors had determined that three of Chris’s arteries were almost completely blocked and a fourth was partially blocked. A week after Chris was admitted, using an artery from his knee, Albany Med cardiothoracic surgeon Li Zhang, M.D., completed quadruple bypass surgery.

The six-hour surgery was a success and Chris has made a slow but steady recovery. He is now back to playing the organ and leading services at few churches in the Southern Columbia Lutheran Parish and is looking forward to the holiday season.

“I am way beyond lucky. It couldn’t have been scripted any better. I had professionals right from the get go. If we were anywhere else, I wouldn’t be here,” Chris said. “I can do Santa this year. I want to. If I can get on a sleigh, be in a parade, and the kids come up to me and they believe, then I have done my job.”